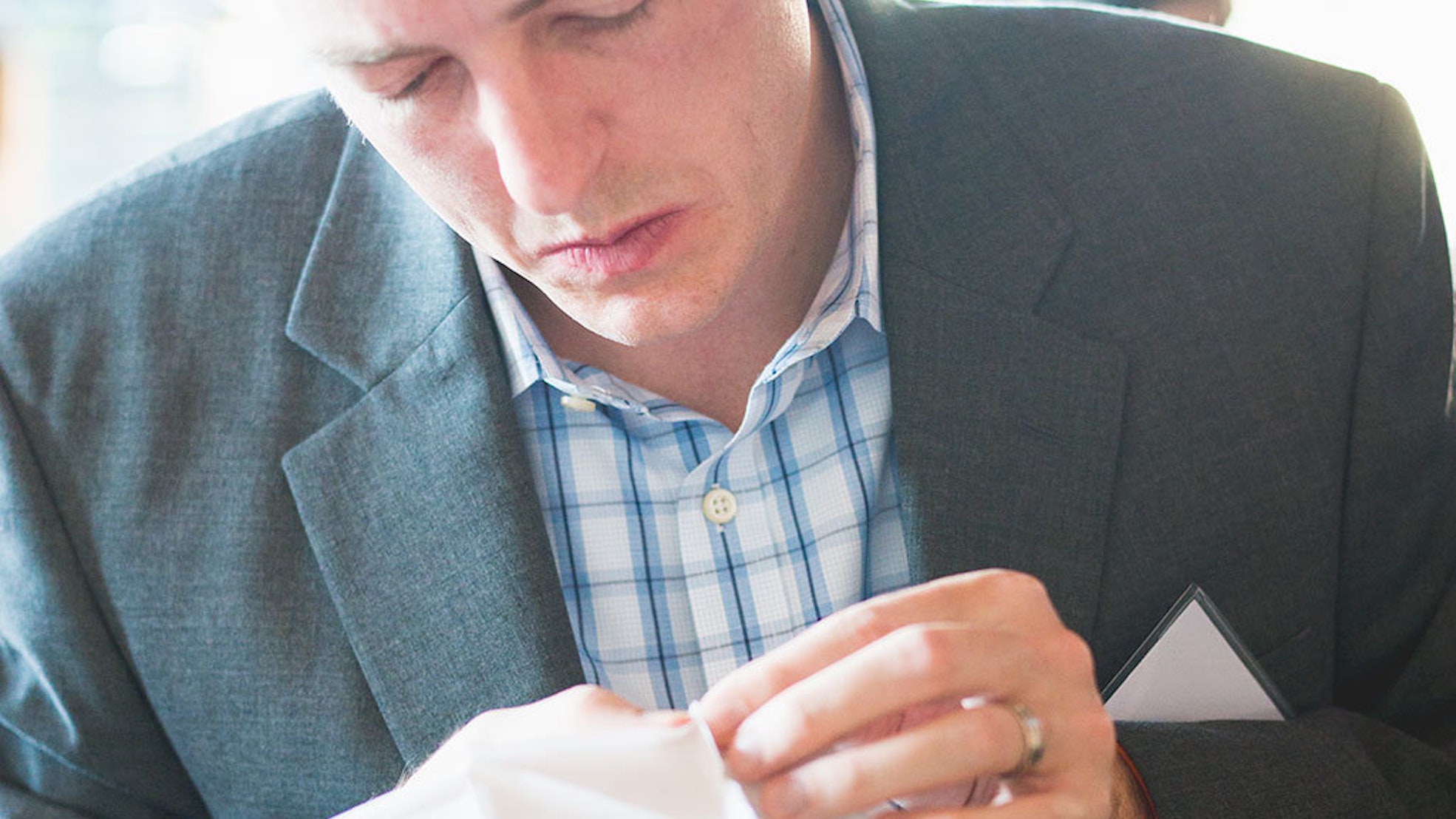 During our Ignite/Create tour stop in Houston we had the chance to meet Truitt Raun, designer at Gensler, origami extraordinaire and winner of our Houston Paper Pendant Challenge. Afterwards, he agreed to chat with us and share his wisdom on creativity, design and turning your ideas into action. We hope his message inspires you as much as it inspired us.

LightArt: Tell us your story.

Truitt: I grew up in a small town so there weren't a ton of venues for understanding creative influences. I grew interested in origami at the age of 10 and it grew into a passion and then an expertise. Once I learned I could create my own origami designs it sparked a realization that I could design other things too. Eventually that turned into a design degree and a career in architecture.

LightArt: What made you want to be an architect?

Truitt: In first grade we went to Disney World where we visited a Japanese hibachi restaurant. They gave me a dollar bill folded into a frog and I unfolded it and then folded it back. I was immediately interested in origami and then in design.

LightArt: What is your favorite project you’ve ever worked on and why? (work related or otherwise)

Truitt: From a couple of years ago before my daughter was born I started to enjoy kinetic sculpture so I designed and built a mobile. The mobile was a series of origami birds I perched on top of sticks. It took a ton of work to find the balance needed to make the piece work. I used thin black wire wrapped around the feet, which allowed me to slide the birds right and left because everything is off set from the center. Since mobiles are built from the bottom up this was crucial. Ultimately the piece worked out and it looked great.

I think that smaller pieces of art are more approachable. It's so easy to come up with an idea and go ahead and get started right away. I don't need large team or the right timing, I just start making something. If you draw something and leave it as an idea on a piece of paper it isn't fun for anyone. I really enjoy getting hands-on and trying new things.

LightArt: What are some of the biggest trends you’re seeing in your industry?

Truitt: In architecture I'm noticing that our design schedules are speeding up. As the schedule gets condensed, we're investigating multiple design solutions all at once and pursuing all of them. When we're well into the formal design process clients are still making changes to the design, that's a big change for us. Because of this, our process needs to be flexible to quickly adapt to changes. We have to be fast and we have to utilize tools to be flexible and deliver good end results.

What is interesting about lots of the new products out there is that they are as adaptable as our new design process. We can come up with a new idea or concept and we can find a product to meet the exact demand. We are gravitating towards those types of products now - the products that give us a sense of freedom. We're not just selecting from a catalog and saying "we'll use this one" anymore.

LightArt:What are some of the biggest changes technology brings to what you love and what you do?

Truitt: Technology and tools today are allowing for rapid means of designing for complex problems. 3D modeling tools allow us to see the entire space before anything is built. More and more tools are allowing us to experience the space before we even design it. For clients, we're able to put more info into models so things can change and develop. Parametric design tools are changing the way we work too. Now we can test out the results for everything we can do within a set of parameters. That's not to say we're not designing the form anymore, but we're also designing what's generating the forms. I see a big future for that sort of stuff.

LightArt: What does creativity mean to you?

Truitt: I like this question so I was thinking about it for quite a while. I think creativity is free thinking with no restrictions. It's allowing your thoughts to run free and to develop over time. Eventually there's an idea, but that idea is only an idea until you take action with it and have an actual physical result from it. It's an entire process but it all starts with a deep thought and contemplation.

LightArt: How do you feel like your style/creativity has evolved over the years?

Truitt: As a child it was about following the rules and finding a set of instructions. Eventually that developed into critical thinking and understanding that I could be the one coming up with those sort of things. I came to understand the mathematics behind the design that I'm interested in. I gravitate toward more of a rule-based design, where I'm able to design in series and that series is based on a set of rules. I like to explore the results to find every possible outcome and then look at those outcomes and edit them down.

Truitt: I love to find geometric and natural patterns and think of ways I can use or manipulate them - those natural patterns have a certain beauty to them that can't be criticized because they simply exist. It's something that most people are able to understand and find beauty in without having to understand how it's done. But there will always be people like me who look into it further.

LightArt: Are there any quotes you live by or that inspire you?

Truitt: An idea is only an idea until you take action.

LightArt: Who are some of your favorite designers and/or creatives?

Truitt: Carlo Scarpa - an architect who designed every aspect of spaces he created. He designed everything from the hardware that connects the handrails to the wall all the way up to using the concept of detail in the overall scheme of a space. It's truly impressive. He had this acute attention to detail he was able to maintain throughout an entire space without repeating it (but using it in every way that was appropriate).

LightArt: Can you tell us some design blogs you visit for inspiration? (if any)

Truitt: I really appreciate what you all are doing - encouraging people to design and create. The maker movement is a pretty incredible movement and it's really inspiring to get people away from being an observer and to give them the courage to get out there and try!